My way of letting off steam!

The Bystander Effect – Would you help? 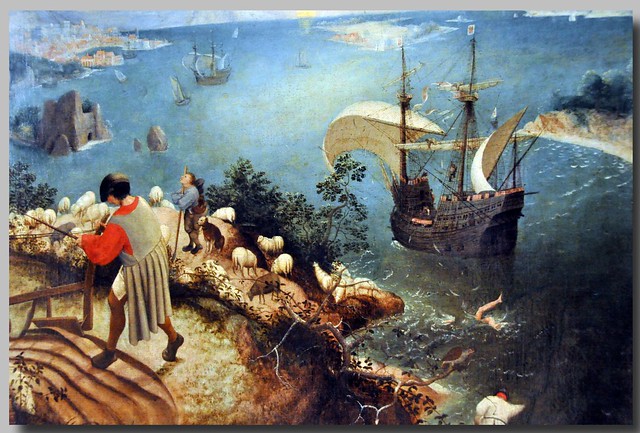 The Fall of Icarus – Bruegel

Icarus succeeded in flying. with wings made by his father Daedalus, using feathers secured with wax. Ignoring his father’s warnings, Icarus chose to fly too close to the sun, melting the wax, and fell into the sea and drowned.

‘In Brueghel’s Icarus, for instance; how everything turns away

Quite leisurely from the disaster; the plowman may

Have heard the splash, the forsaken cry,

But for him it was not an important failure; the sun shone

Water; and the expensive delicate ship that must have seen

Something amazing, a boy falling out of the sky,

Had somewhere to get to and sailed calmly on.’

The Murder of Catherine Genovese

Catherine Genovese was just getting home from work at 3:15 AM in the Kew Gardens suburb of Queens, NY, back in March 1964. As she entered her apartment building, Winston Moseley stabbed her twice in the back. Just before collapsing to the ground, she screamed out for help “Oh my god, he stabbed me, help me!” which was heard by several neighbors who chalked it up to a lover’s spat.

Moseley was temporarily scared off by one neighbor yelling out his window “let that girl alone!” but returned ten minutes later to finish what he started. He found Catherine at the rear of her apartment building, unable to get in the locked door. Moseley stabbed Catherine multiple times and proceeded to rape her toward the end after she stopped fighting. When he was done, he stole what little cash she had and left the scene.

According to reports, there were approximately twelve witnesses who heard the first attack who later said the reason they “just didn’t want to get involved.”  They all assumed someone else would call the police.

Social Psychology
According to the research done by Latane and Darley in 1968 and 1969 bystanders are less likely to intervene when other people are present. They wont go against the group.
People take their cues from those around them. We tell ourselves that someone else will help and fear that we will make fools of ourselves.
We need to make sure that there is no ambiguity in the situation. When with others only 10% help. People’s perception of an emergency is altered by the numbers present.
People who score high in masculinity  are less likely to help in emergency situations, because they fear looking foolish. In contrast, femininity does not seem to be significantly related to bystander intervention.
BUT when people learn about the bystander effect they are more likely to intervene, and is it only types of people who intervene? That isn’t clear.
So!
Where are we left with?………….
The Good Samaritan
There was once a man who was going down from Jerusalem to Jericho when robbers attacked him, stripped him, and beat him up, leaving him half dead. It so happened that a priest was going down that road; but when he saw the man, he walked on by, on the other side. In the same way a Levite also came along, went over and looked at the man, and then walked on by, on the other side. But a Samaritan who was travelling that way came upon the man, and when he saw him, his heart was filled with pity. He went over to him, poured oil and wine on his wounds and bandaged them; then he put the man on his own animal and took him to an inn, when he took care of him. The next day he took out two silver coins and gave them to the innkeeper. “Take care of him”, he told the innkeeper, “and when I come back this way, I will pay you whatever else you spend on him.”
ANY FURTHER THOUGHTS?

Michael – A gay man with mesothelioma